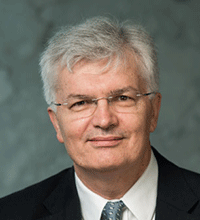 Glyn Davis AC is professor of political science and vice-chancellor and principal of the University of Melbourne.

Professor Davis was educated in political science at the University of New South Wales and the Australian National University, before undertaking post-doctoral appointments as a Harkness Fellow at the University of California Berkeley, the Brookings Institution in Washington DC, and the John F. Kennedy School of Government at Harvard University.

Professor Davis teaches and researches in the field of public policy. His public sector service includes terms as the director-general of the Department of Premier and Cabinet in Queensland, and as foundation chair of the Australia and New Zealand School of Government.

He is a fellow of the Academy of the Social Sciences in Australia and a Companion in the Order of Australia. He has served as chair of the Group of Eight and chair of Universities Australia.

In 2008 Professor Davis co-chaired the Australia 2020 Summit and, in the same year, served as a member of the Innovation Taskforce, an expert group commissioned to review Australia’s research and innovation systems.

In 2010 Professor Davis presented the Boyer Lectures, published as The Republic of Learning.