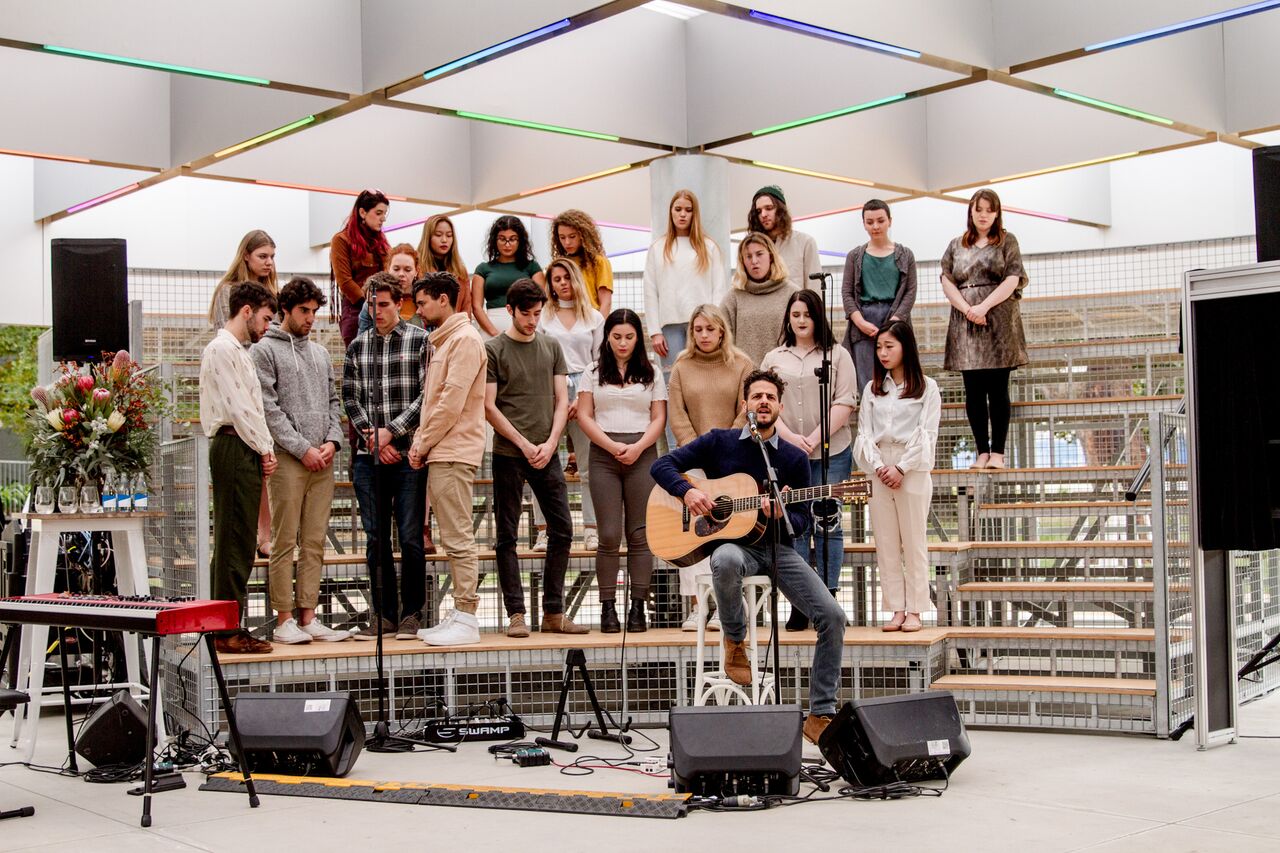 The much-celebrated MPavilion 2017 has officially taken a permanent place in Melbourne’s architectural landscape. We watched with excitement on Tuesday 8 May as the beloved structure, commissioned by the Naomi Milgrom Foundation and designed by Rem Koolhaas and David Gianotten of OMA, was unveiled at its new home on Monash University’s Clayton campus.

Giving the keynote address, Naomi Milgrom AO said: “When Rem Koolhaas and David Gianotten were in Melbourne last October, they mentioned their hope that their MPavilion would be gifted to a university, and I can’t imagine a more perfect match in interest and partnership to be celebrating here today.”

The occasion was marked with performances by Melbourne-based singer-songwriter Lior and the Monash Popular Voice Gospel Choir.

The Naomi Milgrom Foundation gifts each year’s MPavilion to the City of Melbourne to be relocated from its temporary site at Queen Victoria Gardens and engaged as a permanent community and cultural space. MPavilion 2016, designed by Bijoy Jain of Studio Mumbai, can be found at Melbourne Zoo; AL_A’s MPavilion 2015 is in Docklands Park, and Sean Godsell’s MPavilion 2014 has been integrated into the grounds of the Hellenic Museum.

At the opening of MPavilion 2017 at Monash Clayton, Monash University President and Vice-Chancellor Professor Margaret Gardner AO said the new addition would host events for and with the local community. “Nestled in the Australian park landscape that characterises its new surrounds, the MPavilion embodies the frontiers of contemporary design and resonates perfectly with the modernist architecture of our Clayton campus. It will be transformative for the artistic and cultural life of this university.”

Blurring the lines between inside and outside, Rem Koolhaas and David Gianotten took their cues from ancient amphitheatre, designing MPavilion 2017 with flexibility and multifunction in mind. The pavilion’s success as part of our 2017 summer program saw the season extended due to popular demand. More than 117,000 visitors engaged with the architecture and events over 133 days.

In 2018, we welcome Barcelona-based architect Carme Pinós as the esteemed designer of MPavilion.